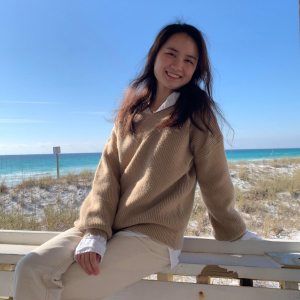 First-year student Eileen Liu from the H. Milton Stewart School of Industrial and Systems Engineering (ISyE) did not always know that she would end up studying engineering. In high school, she was incredibly music-oriented, passionate about playing violin and piano. She served as the concertmaster of her school’s orchestra, a member of the Atlanta Symphony Youth Orchestra and the Emory Youth Symphony Orchestra, and led her own quartet.

But Liu knew that she didn’t want to pursue music as a career, and when she applied to colleges, she mostly secured admissions to STEM schools. While trying to decide if she should attend Georgia Tech, she received an email about her acceptance to the College of Engineering’s Clark Scholars program. Having never heard of it before, she didn’t realize it was a real opportunity until David Torello, the program’s faculty advisor and lecturer from the Woodruff School of Mechanical Engineering, personally called her.

“Clark Scholars definitely played a big role in me choosing to come to Georgia Tech,” said Liu. The scholarship, which is granted to 10 engineering students every year, covers full tuition, room and board, and program costs.

After committing to Georgia Tech, Liu started thinking about what major to choose. After doing some research and talking to friends, she grew interested in ISyE. “I liked ISyE because of its focus on optimization,” said Liu. She considers herself a perfectionist and was interested in the idea of improving efficiency.

The Clark Scholars Program is more than just a scholarship, however. Founded on the pillars of scholarship, service entrepreneurship, and leadership, the program strives to build well-rounded students in a multidisciplinary setting. Scholars take business classes or participate in CREATE-X, volunteer in community service activities, receive mentorship, and attend enrichment seminars.

Though the in-person activities were cancelled because of Covid-19, the Clark Scholars still attended virtual events twice a month, such as the StrengthFinders program, a resume building workshop, and Q&A sessions with the Institute’s current and past deans of engineering.

The StrengthFinders program involved the Clifton Strengths test, which Liu found to be insightful and helped her to identify traits she had never considered strengths before. “You can really see an individual’s different strengths through the test,” she said. “It was interesting to see how people’s strengths would mesh with other ones in different scenarios.”

The Clark Scholars Program has different goals for each of the four years. A major component of the program is the community project that each cohort works together to complete. “They have a mission to help us be more altruistic and give back to the community,” said Liu. She’s looking forward to working on the project, which typically happens in the second year.

Starting college during the Covid-19 pandemic was a challenge, however. Since she was taking online classes from home, it was difficult to feel connected to Georgia Tech. “It was definitely really tough for my mental health,” said Liu. “But on the bright side, I feel like I learned a little bit more about myself — my study habits and what I can I accomplish on my own — and that was also pretty beneficial.”

Having the Clark Scholars meetings, despite being online, helped her to feel more like she was in college. Torello also held monthly one-on-one meetings to connect with each student. “It was a really good mental health check-in,” said Liu.

In addition to attending Clark Scholars events, Liu joined a couple of clubs. In high school, she served as the president of the National Chinese Honors Association, so becoming a member of the Chinese Student Association was a natural decision. She also joined Common Good, a service organization that provides tutoring and mentoring to Atlanta High School students.

As Georgia Tech returns to in-person classes this fall, Liu hopes to have a more authentic college experience. She is looking forward to exploring the ISyE curriculum in more depth and continuing with the Clark Scholars program. Eventually, she would like to study abroad through a program such as ISyE's Summer Program in Europe or Summer Program in Asia, or at Georgia Tech-Lorraine in Metz, France.